Notice: wpdb::prepare was called incorrectly. The query argument of wpdb::prepare() must have a placeholder. Please see Debugging in WordPress for more information. (This message was added in version 3.9.) in /nas/content/live/okfest2014/wp-includes/functions.php on line 3897
"> Sensor Journalism, Uncensored | Open Knowledge Festival 2014 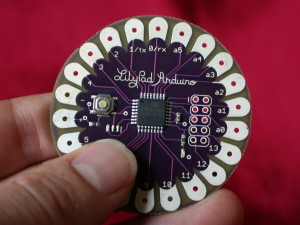 This is a guest blog post by Lily Bui, who runs the Sensors, Uncensored: Using Sensors to Enrich Storytelling session on Tuesday July 15.

How open sensor data can help enrich storytelling + bolster the media’s potential role in galvanizing civic engagement with the sciences.

Something interesting is happening.

Two words: “sensor journalism.” The term is not entirely new, as it has circulated the blogosphere again and again. However, with the growing ubiquity of DIY sensor tools, more opportunities to engage with this new format are emerging.

What is sensor journalism?

Sensor journalism refers to a method of generating or collecting data from sensors, then using that data to tell a story. This may sound familiar, especially with the rise of data-driven journalism and the open data movement.

However, as Kelly Tyrrell aptly puts it, “sensor journalism is the first cousin of data journalism.” The difference is this: instead of scraping data from the internet or existing databases, you are collecting and (in some cases) generating the data.

Who is doing this?

My favorite example is WNYC’s Cicada Tracker. Lead by John Keefe, the project engaged WNYC listeners to build their own temperature sensors at home using instructions provided on the station website. The goal was to crowdsource temperature readings around the east coast to predict the emergence of the Magicicada brood. The data were then collected, visualized (beautifully) on a map, and used to tell a story.

Both scientific research and journalistic endeavor begin with the same thing: a question. In answering that question, for both science and journalism, crowdsourcing data allows the public to actively contribute to the investigation of the truth.

These are some more examples of crowdsourced science (some involving sensors, some not) in the news. No doubt, this is only a small slice of the pie. I sense (get it?) that there is much more brewing beneath the surface.

Who is gathering the data, and how accurate is it?

To reiterate, the idea of crowdsourced data collection is not new. Maker communities like Instructables, Spark Fun, Public Lab, MakeZine, and DIY.org have been around for a while and often focus on building tools (hardware and software) to make remote measurement possible. People who identify themselves as citizen scientists, hobbyists, or amateur scientists connected to communities like Cornell’s Ornithology Lab, CosmoQuest, SciStarter, Your Wild Life, and Zooniverse are also likely candidates for crowdsourced projects.

“This kind of technology is not for monitoring people,” said Travis Hartman in a recent interview with Current. “It's for monitoring the environment we all share.”

Hartman is a journalism grad student with an idea for a project to deploy a set of sensors throughout Columbia, Missouri, in order to study the city’s sound ecology. Like Hartman, many citizen scientists are non-experts (i.e. they don’t hold formal science degrees) but have an avid interest in science. That said, the argument against the quality or legitimacy of crowdsourced data does come up. And I’ll concede that it is, indeed, a valid one.

How can we trust the data, even if we can track where it’s coming from? How do we know that build-it-yourself sensors are accurately calibrated and in working condition? Or worse–what if the data are biased or completely wrong? We can’t always know, but that shouldn’t deter us. An academic paper finds, “Most [citizen science] projects employ multiple mechanisms to ensure data quality and appropriate levels of validation. (Wiggins, et al., 2011)” Some citizen science project managers use crowdsourced data sets in an auxiliary manner to observe general trends rather than precise data points. Then, some projects use crowdsourced data comparatively, with reference to existing academic data. [Aside: There is also a phenomenon known as the “wisdom of crowds.”]

Meanwhile, journalists are also finding ways to use crowdsourced data to contextualize and enrich stories rather than relying on them as a primary means of telling them (e.g. WNYC’s Cicada Tracker). At the end of the day, a healthy level of skepticism can only help advance current methods of crowdsourced data collection, as it suggests room for improvement.

How can open sensors benefit journalists?

When it comes to environmental monitoring, government agencies like the Environmental Protection Agency (EPA) do run regularly scheduled tests on air and water quality. However, this data is not always available to or accessible by the public. Also, if something were to affect the air or water quality between testing periods, and a government agency wasn’t aware of it, the public would otherwise be left in the dark about their environment. Bringing DIY-sensors into the picture could potentially democratize the process of monitoring your surroundings. For journalists, these data can offer insight into pertinent issues that eventually influence policy.

In making a case for why journalists should pay attention to and care about open sensor networks, Javaun Moradi writes (on his blog):

“It's a responsibility that is every bit as noble as reporting and can achieve the journalism goals of informing the public, investigating corruption, speaking for the voiceless, and seeking truth. The other side benefit is that local media can deeply engage with their audience in new ways.”

There’s also another dimension to this. While many citizen science projects are national and international (meaning anyone, anywhere can participate), some are local, focusing their research question on a specific region or city. As we all know, news can also be local–even hyperlocal.

What could a more robust relationship between citizen science and the media potentially mean? A few things come to mind:

Local media outlets can also help connect the public to opportunities to take action in their own communities. WHYY-FM (an NPR affiliate station) in Philadelphia has launched a bi-weekly citizen science segment in partnership with citizen science site SciStarter, focusing on projects connected to their broadcast region. A recent story focused on how the public can help report sightings of the woody adelgid in Douglas firs to help scientists track the invasive species in or near Philly. Journalists and media outlets can help facilitate the discovery of these types of local opportunities.

The Future of Sensor Journalism

As we move forward into the future, networked sensors will likely become a more integrated part of our lives. With the improvement of wearable tech like Google Glass, the FitBit, Jawbone, and more, will the possibilities for sensor journalism shift from reporting on our environment to deeper stories on data we’ve collected about ourselves and each other? Granted, these projections are not without their caveats. The incipient ubiquity of networked sensors also raises important discussions about surveillance, privacy, and ethics.

I am enthralled by how many people are trying new things with sensor data. I love this spirit of experimentation that is circulating, and I hope that it’s contagious.

Questions: What other sensor projects (related to journalism or otherwise) have you come across? What other applications do you see for open sensor data that people haven’t tried yet? What research, tools, or frameworks are missing in order to help this field move forward?

Leave your thoughts in the comments below or tweet me @dangerbui.

One thought on “Sensor Journalism, Uncensored”